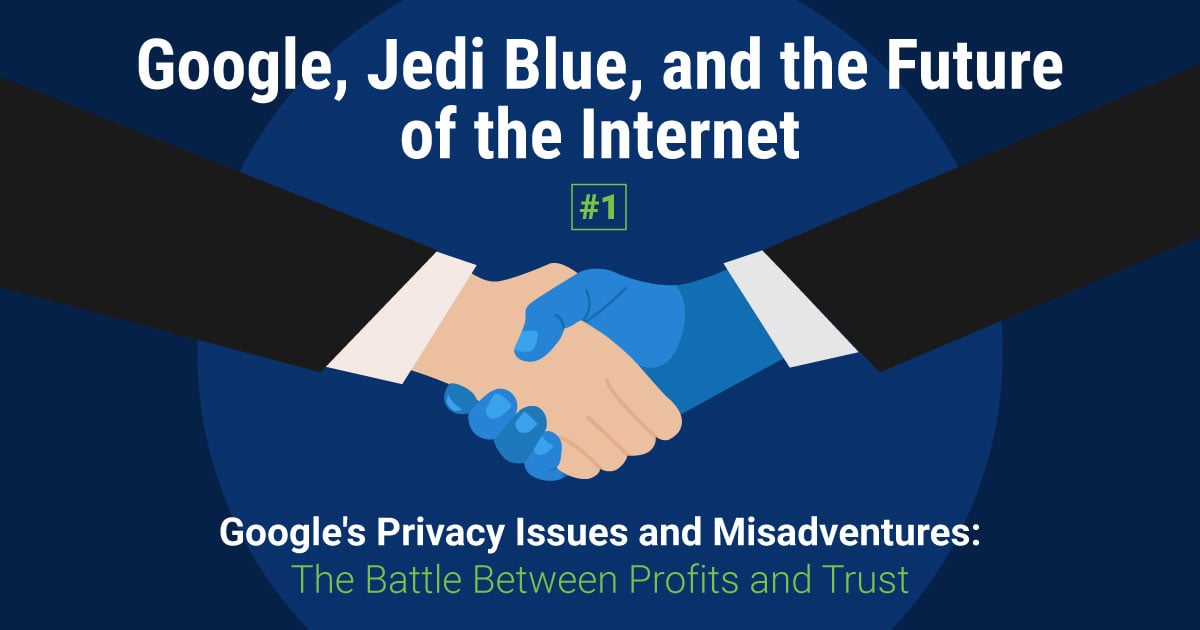 Google started with the best of intentions, to bring the world’s information at your fingertips. It has sure delivered on that goal, but at what cost? This article will examine the tug of war Google is playing between generating profits and honoring user privacy laws. The twi are in direct conflict and in many cases, Google has been caught red-handed breaking the rules. In fact, in recent years, Google's privacy issues have been so notorious that nearly everyone in the digital space has at least heard about them.

Proof? User confidence is low with 80% of Americans believing that the risks of data collection outweigh the benefits. However, steps are being made in the right direction. Read to the very end to find out what they are and if it’s enough to reset the user privacy problem.

Let’s start by looking at what user privacy laws Google have broken over the years. You would think that after a few fines they would have learnt their lesson. In reality, there is a pattern of trying to get away with “it” in the pursuit of generating more profits.

2019, January: the French data protection watchdog fined Google $60 million for failing to offer understandable and transparent information on its data use policies. However, this fine was just a slap on the wrist because the maximum potential penalty is 4% of annual turnover, which at the time for Google was 4 Billion Euros. Google was accused of making information difficult to find by splitting them across multiple digital pages and documents.

2020, December: France fined Google $120 Million for misusing ad-tracking cookie technology. The French data privacy watchdogs, CNIL, biggest fine at the time. The problem was that Google did not seek user consent about using their ad-tracking cookie. Google denied the allegations and that they always provide information upfront.

Fines of $50-100 million would cripple most companies, but Google’s parent company, Alphabet, had a net income of $43.34 billion in 2019. Are the fines big enough for Google to change their policies? You’ll see later in the article that Google is making changes…on the surface at least.

However, as you’ll learn in the next article of this ClickGUARD series, the Jedi Blue scandal paints a different picture. The fines may have only served the purpose of getting Google to improve their public image while making their illegal practices harder to uncover.

Google is one of the wealthiest corporations in the world, so why is it so hard for them to implement a system that adheres to user privacy? The short answer is: money. You may have heard of the phrase, “The love of money is the root of all evil”. Unfortunately, it seems to be  true here and adhering to user privacy laws directly impacts their bottom line.

That’s because when users reject tracking cookies, it means that advertising is not as effective, which reduces the profits generated from those ads. Therefore, it is easier to force cookies onto every search engine user instead of asking for permission.

Using shady tactics, such as making tracking cookies policies hard to understand, also benefits their bottom line. Users who are actively trying to understand how they will be tracked want to know the extent of the technology. If Google presents the technology as harmless through confusion or a lack of information, then users are more likely to accept the ad-tracking cookies.

You see, forcing tracking cookies and increasing the intensity of tracking technologies increases ad profitability. Google is operating on such a large scale that even small user privacy breaches can net hundreds of millions in extra profits.

It’s not surprising that Google has these struggles as many large corporations struggle with giving up profits if they can get away with breaking the rules. For example, Amazon was fined a staggering $886 million by Luxembourg’s National Commission for Data Protection for breaking the EU’s data protection laws.

You’ll notice that Google’s fines came during the last few years, yet the company has been around for over a decade. So what has changed over time to create these user privacy problems?

Changes Made to Google Privacy Policies – From Aggregate to the Individual

During the early years of the internet there were no individual users. You would navigate websites and execute searches anonymously. Information that websites and companies harvested was done in the aggregate. Therefore, information was summarized based on hordes of users instead of granularly looking at the actions of each one.

It meant that advertisers could not target specific users and increase the relevancy of their offers. Google’s ad platform is their main source of revenue, which means optimizing the performance of ad campaigns is one of their priorities.

Naturally, Google began to make changes to the way it gathers information. The switch to gathering information about specific users was a game-changer. Not just for Google but other companies like Facebook and Amazon. Also, Google started combining information from several products, which included YouTube, Gmail, Blogger, Google TV, Google+ and Web History.

Google also improved the depth of how they gathered user information and put it to use. In the name of providing a “beautifully simple experience”, Google decided to create rich user profiles that advertisers could take advantage of to create highly-targeted ads.

The switch from aggregate to the individual meant that Google harnessed a lot of information about each user. Privacy laws had to be updated to match the dangers, but Google did not implement the necessary changes over the years to adhere to the rules. As mentioned previously, doing so would compromise their profitability.

What changes Google has made in the right direction

Google has not gone unchecked as you have learnt from the fines they have had to pay. It spurred them into action to create changes to their user privacy policies. However, will they be enough? Decide for yourself by checking them out below:

On September 21st of 2021 Google updated their Google Ads’ Policies to create consequences for breaking the rules. The system operates on a 3 strike policy and the first violation does not result in a strike, just a violation. With the 3rd strike Google will place your account on a 7 day suspension.

This change means that advertisers will need to be careful about not taking advantage of user privacy. Advertisers that break the rules will harm their bottom line, so it is a step in the right direction.

As Search Engine Land reports, PPC professionals are generally in agreement with the policies. However, the problem is how the policies will be applied. Incorrect application of the policies by the team handing out suspensions can unfairly target advertisers trying to stick by the rules.

This is a serious problem because getting unfairly suspended for a week could drastically impact sales. Especially if the business has thrown all their eggs in one basket by relying on Google Ads for the majority of their traffic. Even if you can prove a case for wrongful suspension, it might take days to communicate with customer support to iron out the issue.

Google plans to make third party cookies obsolete on their Chrome browser, which would be a game-changer for user privacy rights. They also claim that alternative technologies would not be created that would take the place of cookies.

Effective privacy innovations that allow for user targeting while preserving individual privacy are at the forefront of this change. The idea is to hide individuals into a crowd of users that have similar interests. This means users will continue to receive highly-targeted ads without giving up their privacy. This is an important point because 71% of users prefer to receive personalized ads.

Google is making changes to user privacy on their Chrome browsers by changing the technology and involving communities in the testing and implementation. Companies like Salesforce, White Ops and Yahoo! are being given the chance to test different solutions to see and provide feedback. Ideally, the feedback will be implemented so that all parties are happy with the upcoming changes.

Since Chrome has a market share of 69.28%, it’s important for the browser to lead the way in improving user privacy.

The multiple breaches for user trust are worrying, given how much power companies like Google wield. They have a monopoly in the search engine industry, so it’s not a simple case of switching over to a competitor that can be trusted.

The changes to user privacy outlined are a step in the right direction, but the issues mentioned in this article are just the tip of the iceberg. The recent Jedi Blue scandal is an example of why marketers should be worried about Google’s practices. You can read all about it in our next article, “Google and the Jedi Blue Scandal: Why Marketers Can’t Trust the Platform”.