Google’s Problems — And How to Move Forward 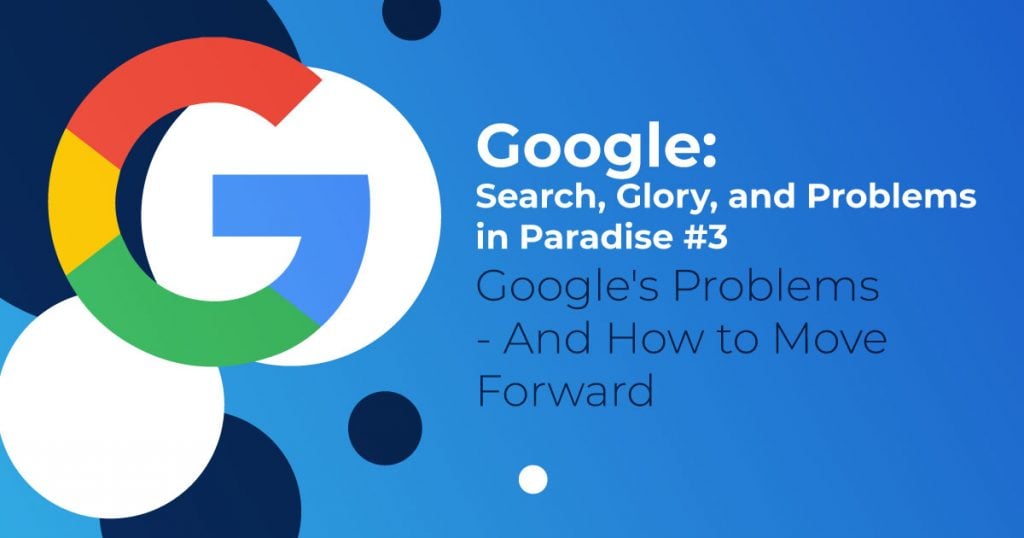 In 2021, Google has its fingers in many pies but advertising is still their biggest earner by far. In fact, 80% of its parent company (Alphabet) earnings in 2020 came from Google’s ads business, which was $147 billion. It has been the market leader in online advertising for over a decade, so marketers have to take part in doing business on the platform. And yet, despite their success, Google’s problems run deep — beginning with the IVT (Invalid Traffic) issues as mentioned in the previous article: “On Invalid Traffic in Google Ads and Other Demons” and ending with… a myriad of other issues.

Unfortunately, IVT is just the tip of the iceberg at Google – there are far more problems marketers (and users alike) should know about. After all, what affects Google could impact your business. Therefore, it makes sense to keep informed on how Google navigates the choppy waters of being one of the biggest tech companies in history.

Google’s culture is coming under increasing scrutiny and it’s only a matter of time before the tipping point is reached. For example, some employees are fed up with aberrant geniuses and their holier-than-thou attitude, but an Eric Schmidt quote suggests they are vital: “You need these aberrant geniuses because they’re the ones that drive, in most cases, the product excellence,”

So what’s the problem? One of the geniuses is Andy Rubin, who received an exit package of $90 million in 2014 after accusations of sexual misconduct. Google employees were outraged, as was the rest of the world, and staged mass resignations in protest. The lack of repercussions points to the rotten culture that turns a blind eye to misconduct.

It’s no secret that the biggest tech companies in the United States have a reputation for favoring Democrats over Republicans –  as indicated during the 2020 elections when Democrats received the majority of the political donations. So should everyone working at Google be a Democrat or be fired? Of course not! But Republican employees are firing back, accusing that politics was the cause of their departure.

To overcome these company culture problems Google needs to go back to basics and reassess its core values. Then they need to be communicated and implemented at every level – no double standards. Reinforcing positivity in the workplace and creating a healthy culture are the stepping stones for improvement.

On paper, Google is a force to be reckoned with, a company that has a monopoly in several markets. Just a few decades ago, it was unthinkable that a tech company could grow to have so many users and influence beyond measure. However, back then, Amazon, Facebook, and Apple weren’t the behemoths they are today.

Google executes countless queries with commercial or buying internet, but no marketplace has a bigger sway over what products are sold and bought than Amazon. Furthermore, Its ad business is starting to give Google a run for its money, as the quarterly totals are approaching $7 billion. However, the companies are intertwined, because many content creators build Amazon affiliate websites, which gives Google more content to satisfy users and in return Amazon receives more traffic.

Facebook has over 2.89 billion active monthly users and services that Google doesn’t provide. The deep social interactions that take place on Facebook mean it’s a platform that users return to daily. Facebook also offers pages for business, a marketplace, and an ad network with strong targeting features. Also, Facebook ads are generally cheaper than Google ads – this will vary based on your industry.

Apple sold 201 million smartphones in 2020 alone. Why does this matter? After all, Google does not rely on smartphone sales for a significant portion of its income, even though the Pixel phones are a worthy competitor of any smartphone out there.

Apple has a 26.4% share of the mobile operating system market. That’s a lot of users and the default search engine on Siri and Spotlight has been changed to Bing. Furthermore, it’s allowing the use of ad-blockers on the Safari browser and has blocked Google Maps from working on CarPlay. See a pattern? Apple is not playing ball with Google and it’s eating into their bottom line.

Data privacy has been a hot topic for years and gained significant public interest after the Cambridge Analytica and Facebook scandal, where user profiles were sold and used to manipulate American voters.

Google is a data harvesting machine that you cannot avoid if you’re using one of their products. For example, if you’re using an Android smartphone, then you may potentially receive ads in your local area from advertisers using the Google ad platform.

Furthermore, not getting permission over how to use customer data is one of the accusations made by the Australian Competition and Consumer Commission (ACCC). The claim is that Google used shady tactics to receive permissions, which it denied.

Another issue is the data security of their users. Like any company nowadays that stores information digitally, Google is prone to hacking attacks. Such data breaches would be catastrophic because Google harnesses more customer data than most. Users do have the option to block all tracking to preserve their privacy.

The French Data Protection Authority fined Google $57 million for violating the EU’s General Data Protection Regulation. In particular, how they handled ad personalization. Furthermore, it was fined $120 million for dropping cookies without consent.

The Google ranking algorithm is a closely guarded corporate secret, so how do we know if it’s fair? Does Google promote its own assets over the competition? Will it penalize the ranking of media articles that say a bad word about their brand? Nobody can be sure and allegations have been thrown their way.

The claims are that Google prioritizes bigger businesses over smaller ones and filters out sensitive topics from autocomplete results. These include topics like abortion or immigration and website blacklisting is not out of the question either.

Antitrust lawsuits were filed by a coalition of 38 states over how google’s search engine is designed. The states want Google to level the playing field by getting rid of anticompetitive conduct.

Ranking manipulation (if it exists) is a serious problem for marketers that want to have a fair shot at beating the competition. Any bias towards companies of a certain type or size is not in the spirit of a fair playing field.

Free speech is another hot topic that tech companies cannot hide from. Should companies like Google intervene when bad actors are planning to do harm? Or when hate groups are organizing an aggressive rally? If Google will interfere, then what topics will they allow on their platforms, and what will be removed?

The answers to these questions are fiercely debated today with no clear-cut system in place. YouTube, one of Google’s assets, tackles video censorship by demonetizing what it deems are “sensitive topics” such as the novel coronavirus.

However, if Google tries to stay out of censorship, then it also opens itself up to attack – as illustrated by the 162,000 EUR fine by Russia for failing to remove banned content under law. It also had to back out of China in 2010 because it refused to comply with censorship laws.

So, Is There a Solution to Google’s Problems?

It depends. There are no easy answers for issues such as policing free speech and overcoming algorithm suspicions. You cannot divulge the details of the search ranking algorithm because it’s intellectual property. Revealing the algorithm will also lead to SEO professionals taking advantage of the information to manipulate the search results. This means Google will always have a target on its back regarding search manipulation accusations.

Whereas, for issues such as data privacy and company culture, Google has the power and responsibility to improve. Being transparent will go a long way towards gaining the trust of employees and the general public alike. Being honest with people will build a lot of goodwill that will go in their favor should they make a mistake.

Finally, for marketers, the thorny issue of IVT is yet to be fully addressed by Google. They have a lot on their plate so don’t expect any bulletproof fixes anytime soon. Instead consider ClickGUARD, the invalid click fraud protection software that will eliminate poor quality traffic from your Google ads campaigns. 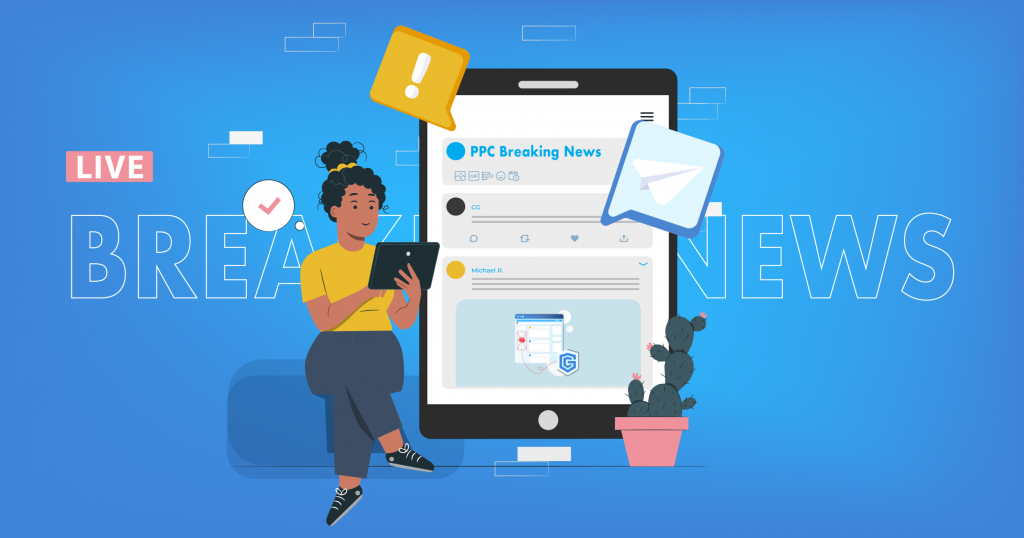 Apple & Google Plead US Lawmakers Not to Pass Antitrust Regulation. Here’s Why

Apple and Google, whenever they’re in the news, seem to…

Should You Target CPA in Google Ads? — A Bidding Strategy Overview

Google Ads bidding strategies can be a bit of a…

Optimizely vs VWO: Which One Is Right for You?

There is a plethora of tools out there for marketers…