On Invalid Traffic in Google Ads and Other Demons 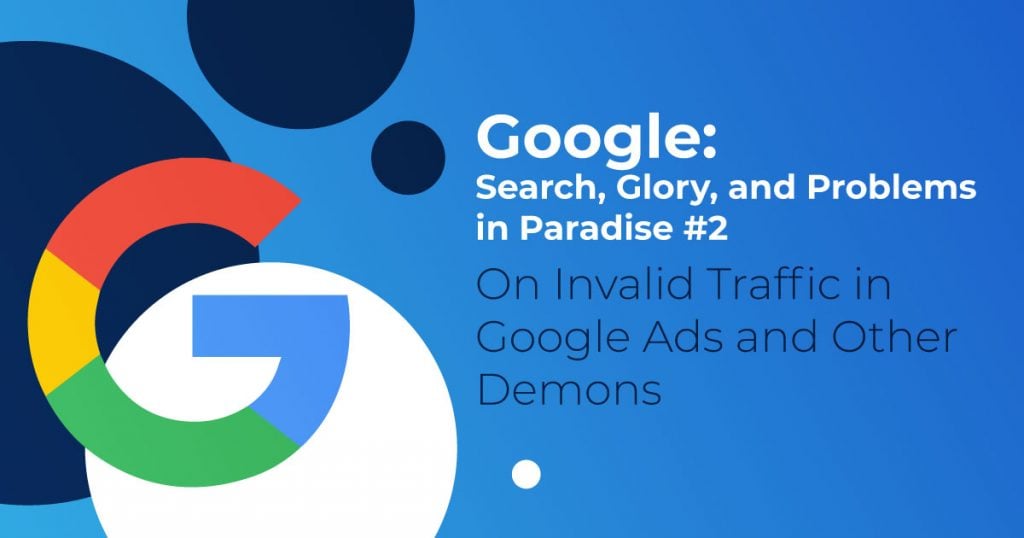 Google has grown to become a tech powerhouse as you might have read in our previous article: “A History of Google, the Tech Giant that Reshaped the World”. The massive growth was primarily a result of their lucrative monetization model – advertising. At the same time, though, invalid traffic is also one of the biggest issues Google Ads faces.

When Google introduced AdWords on October 23rd of 2000, they were experimenting with a CPM (cost per thousand impressions). Three years later, they introduced pay-per-click and the rest is history. The huge user base and countless SERPs (search engine results page) means Google has massive digital real estate to display ads.

In theory, this is also a great deal for companies that want to increase brand exposure and sell products. However, for Google Ads to be truly profitable for businesses, Google should ensure advertisers that each click they receive (and pay for) is legitimate. Sadly, this is not the case. And that’s the big problem marketers have to deal with which is hitting their bottom line.

Google Ads, Not a Bed of Roses

Despite Google being the top PPC player with 37.2% of the market share and FaceBook with 20%, they are not providing the best service for advertisers. One of their biggest problems is invalid traffic IVT (invalid traffic).

A study in 2019 found that 10.8% of global ad traffic is fraudulent. That could be the difference between your PPC campaign being a success or a failure — especially, in competitive markets, where profit margins are razor-thin. Another study by Juniper Research predicts that Advertisers will reach $100 billion in losses by 2023 – ouch!

Let’s go into more detail about the IVT problem – it’s vital information every digital marketer should know before launching their next PPC campaign.

Invalid Traffic in Google, A Problem with Many Facets

IVT can be defined as traffic that is generated from clicks without a real user having genuine interest. Let’s pick this sentence apart. The words “real user” are significant here because clicks can be generated by automated bots, human click farms, or mere accidents. For PPC platforms, it can be hard to distinguish between a real user click and a bot, so it’s a huge source of fraudulent clicks.

Next, the “genuine interest” part is important too. Users that click ads because they were wrongly incentivized or confused it with an organic listing are not even interested in the advertisement, so they are highly unlikely to want to buy anything from you. It’s wasted dollars for marketers that could be allocated elsewhere.

There are 2 IVT traffic types you need to know about:

If there is such a thing, this is the “good” IVT version. It refers to crawlers and legal bots that are a natural byproduct of the internet landscape. There is nothing malicious about this traffic because it does not try to mimic real-user behavior.

All fraudulent traffic is known as SIVT and it’s hard to detect. You may need software, strategies, and expertise to detect and combat this traffic type to avoid fraudulent clicks. The possible SIVT types are:

To make matters worse, the fraudsters behind these tactics use a combination of them and continue to innovate. Therefore, you need to stay updated with the latest techniques to combat the problem or invest in professionals to fight back on your behalf.

Google uses an algorithm to detect fraudulent clicks in real-time. Theoretically, their system will filter out invalid clicks and you as the advertiser will not get charged. You can see the invalid click data in your Google Ads account. You may need to play around with your user interface so that the columns with the appropriate information are showing.

Google will also execute offline analysis and even investigations in rare cases. The latter is reserved for a more severe case of click fraud where a higher volume of clicks, and therefore money is on the line.

However, you cannot expect Google to catch every invalid click that hits your PPC campaigns. After all, they are not directly incentivized to find them all since they are still getting paid for fraudulent clicks. You need to take matters into your own hands to combat IVT.

How to Spot Potential IVT Activity

It’s possible to identify IVT using Google Analytics or 3rd party software. Quality control is a time-consuming task but one that can pay off if you spot problems before they get too big. Here are 3 key performance indicators worth paying attention to:

These are just a few of the KPIs that can help you spot IVT activity. Use the other information in your analytics dashboard and think outside the box to spot IVT before it gets out of hand.

It’s only a matter of time before your PPC campaigns get hit with IVT problems. Therefore, it makes sense to get ahead of the issues by taking preventive steps – after all, these insights are good practices to follow.

You may spot an IVT increase after forging a relationship with a new partner such as a directory listing, search engine or ad network. To avoid this complete a background check to verify the quality of the partner. Contact other publishers that use their service and read online reviews. Also, find out about the traffic types that the partner provides and figure out if your offer is a good match.

Monitor the type and quality of the traffic you are receiving. Is there a demographic that’s suspicious? It’s smart to remove ad codes from high-risk sources based on location, source website and channel. Using a dedicated ad fraud service like ClickGUARD will help you spot trouble a mile off.

IVT can be a simple case of not configuring your ad as intended. Check for errors and make sure the ads comply with the ad network rules.

If you have to click on your ads, then use the Google Publisher Console. It’s the only way to ensure that you do not get clicks that count towards the spam total.

Google’s Business Model: Ethical or Not?

Google defines IVT as “clicks or impressions that may artificially inflate an advertiser’s costs or a publisher’s earnings”. However, what if users click on ads mistakenly because they thought it was an organic listing? Does Google care that publishers will go out of pocket from these clicks? Not really, since they are constantly trying to blend ads in with the organic listings.

Consider a scenario where businesses are forced to create ads on search terms with their own brand name. It’s a defensive strategy to prevent competitors from bidding on those KW’s and stealing customers. However, customers that are using Google for navigational purposes only (meaning they are looking for one specific website), will click the ad link because it’s higher up the page. In fact, the top 5 SERP links account for 67.60% of the clicks, which nowadays are mostly ads.

Google is not playing by its own rules by placing so many ads above organic search results. Don’t get me wrong, above-the-fold placement is great for ad visibility – but it leads to significant IVT because the ads blend in. An easy workaround would be to place the organic link of the official website of the brand that is included in the search string.

Invalid traffic is a big thorn in Google’s side and a problem with most PPC networks. However, while Google does offer support, by blocking a percentage of invalid clicks, they are not always acting in the best interests of the publisher. It’s not all doom and gloom. Being aware of the issues and the amount of advertising funds IVT sucks out should incentivize you to combat the problem.

To make matters worse, Google Ads can also be riddled with wasteful clicks coming from all sorts of sources. Your ad could have been poorly targeted (which tends to happen quite a lot in Google Smart Campaigns, for example), it could have issues in terms of copy or placement, or it could end up being displayed to people living in parts of the world where your product is not even available. These are just a few examples comprising a much larger issue (a multi-billion dollar one that affects advertisers and wastes their Google Ads budgets on peanuts). More on this, though, in our next article: “Google’s Problems — And How to Move Forward”.

The good news is that you can improve the profitability of your PPC campaigns by cutting down on wasteful traffic. For instance, products like ClickGUARD help you block out fraudulent, wasteful, and bot-driven clicks automatically, without any kind of hassle. 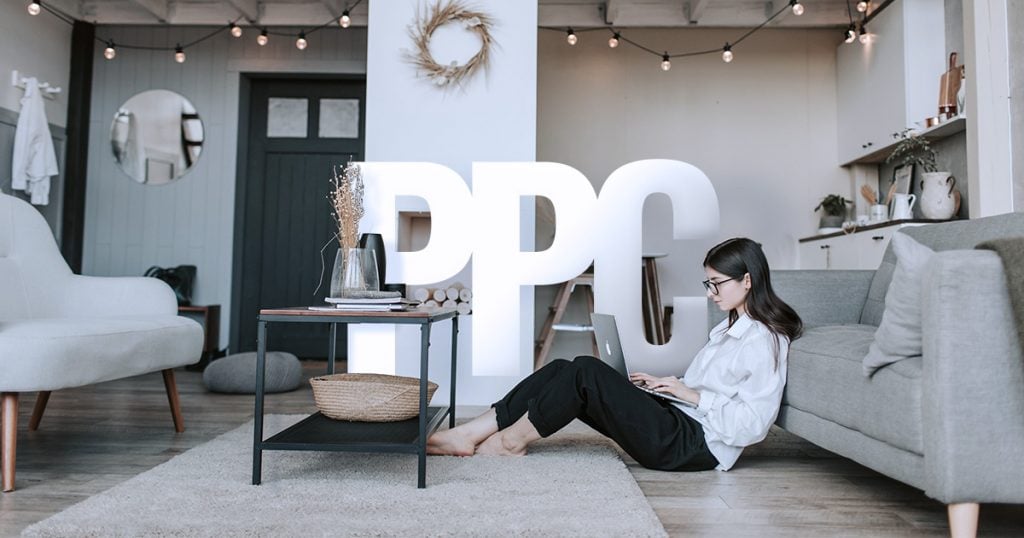 How to Build Remote Teams for Your PPC Agency

The world is getting smaller. Faraway places and faraway people…

Types of PPC Fraud You Might Not Be Aware of

There’s no way around it – with conducting business online… 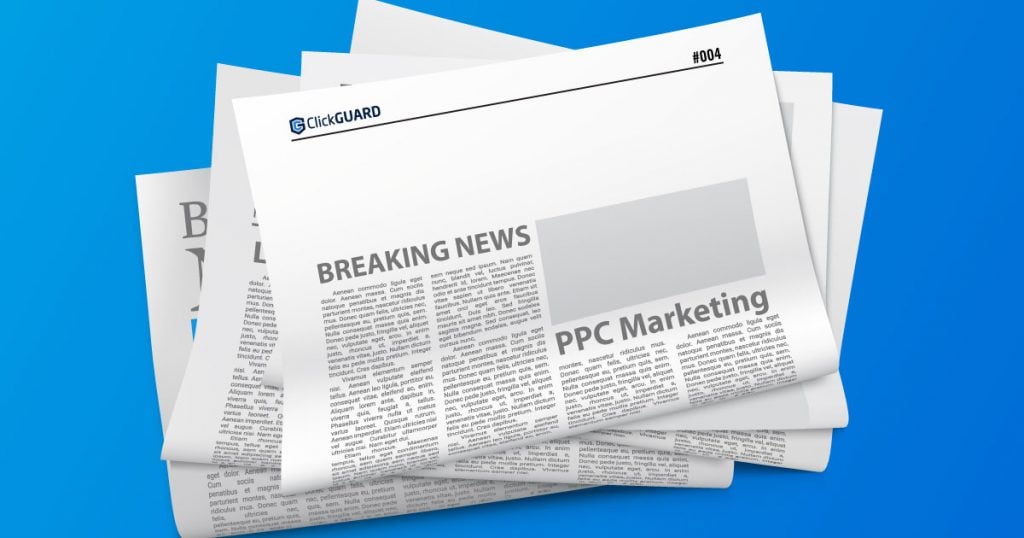 ClickGUARD is pleased to report that our tool was included…