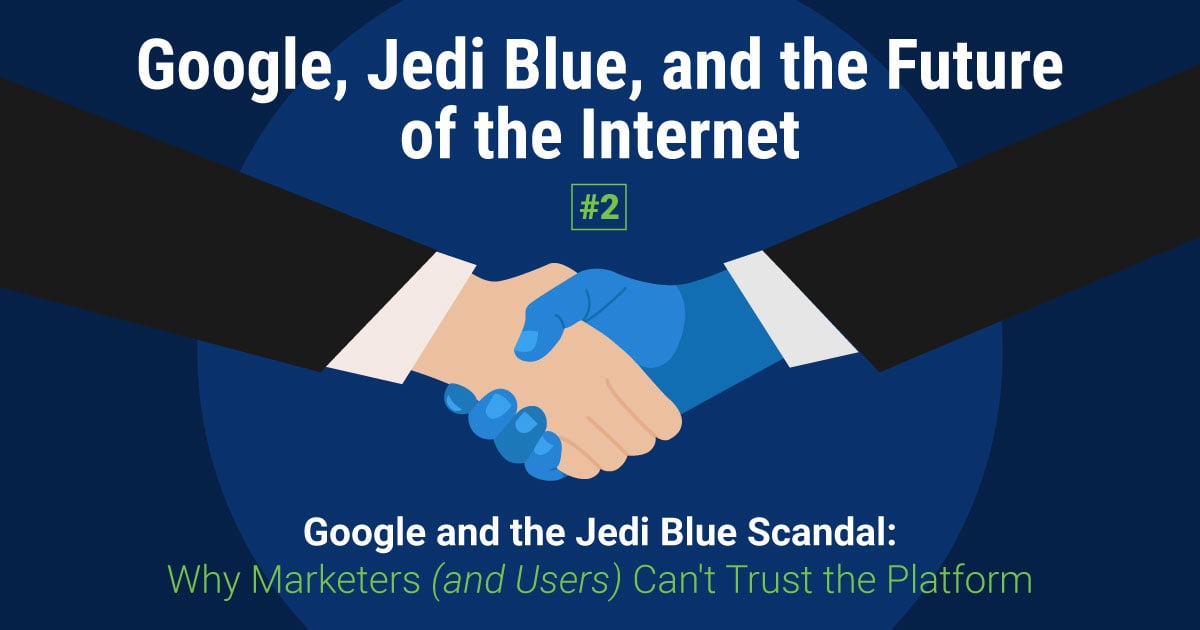 Unfortunately, Jedi Blue is not a new Star Wars TV Show. That would have been preferable to what it's actually about. The term is a geeky codename for a deal struck between Google and Facebook. A deal that involves manipulating the Google Ads platform illegally. The Jedi Blue Scandal was exposed by The Wall Street Journal and is a detailed look at how the 2 companies formed an alliance to take part in price-fixing and preferential treatment in auctions.

To get a hang on just how serious this is, to the date, 10 US states filed a complaint in the U.S. District Court in Texas, in December of 2020, with accusations of Google and Facebook teaming up to create a digital-marketing monopoly from rigged ad auctions.

This is shocking but not surprising because Google has a history of breaking the rules as our last article suggests: “Google’s Privacy Issues & Misadventures: The Battle Between Profits and Trust”. However, the extent and sophistication of the collusion here should make PPC marketers take notice. The scandal reveals why PPC marketers can’t entirely trust the Google Ads platform and change will be required to restore it.

Let’s dive deeper into the details of the Jedi Blue scandal and reveal what they were getting away with. You’ll see how the egregious practices directly impacted your bottom line if you use the Google Ads platform.

In 2017, Facebook started showing an interest in developing its own header bidding platform. Header bidding is a way for publishers to provide digital ad real estate to multiple ad exchanges at the same time. It allows publishers to make more revenue since more advertisers are bidding for the same digital space.

This competition would be disastrous for Google because Facebook has the resources and expertise to develop a system that would compete with their display network offerings. So Google came up with an offer that Facebook couldn’t refuse. The offer provided Facebook huge benefits on their Google’s Ads platform and in return they would not create competing technologies in this space.

Facebook had a choice: to spend billions creating software that could do what Google was already providing or to build their own header-based advertising system. Advertising is a zero-sum game because a limited number of people spend money on ads. Therefore, getting into bed with a giant tech giant such as Google made more sense rather than competing with them – even if it’s illegal and unfairly gives them an advantage over other advertisers using Google Ads.

Here is a summary of the Jedi Blu contract terms:

These conditions were not offered to other advertisers, giving Facebook a significant advantage. If you’ve been using Google Ads, then you are essentially a victim of Jedi Blue. Your bottom line suffered because you may have placed bids yet did not win the ad placement that you should have, but worser still, this can lead to inflated bidding and overpriced paid media

Note that Facebook received an extra 140 milliseconds to place bids, which means publisher pages took longer to load. This reduced the overall performance of website pages running Google Ads, and let’s face it, that’s a huge portion of the internet. It appears that giving preferential treatment to Facebook is worth the website loading speed downgrade. Publishers had no say in this and naturally would have been outraged.

The 5-10% transaction fee that Google charges Facebook is another clear advantage. They claim this is the industry standard, when regulators say the average is around 20%. Therefore, marketers using Google Ads are paying 2-3 times more in transaction fees for using header bidding than Facebook. This is clearly an issue from an ethical point of view. Why should you have to pay more than Facebook for the same service? It means the profitability of your ad campaigns are lower and potentially unviable. Not because of fair market dynamics, but because of a not so secret deal between two technology giants.

Jedi Blue also meant that Facebook got more exposure and could bid on ad placements on 90% of the network. It’s another advantage that tilts the odds in their favor and potentially reduces the exposure of other brands.

Overall, the deal is appalling business ethics. Unfairly giving one company an advantage over others does not create a level playing field. Shady deals should not detract from your ability to market your brand. That’s especially true when the deals are made behind closed doors where information is kept private.

Do Marketers See a Future in Google Ads?

The Jedi Blue scandal is a big bombshell that can definitely give you serious cause for concern if your goal is to use Google Ads as your primary customer acquisition vertical. You might be even thinking: “should I continue to use Google Ads for my revenue growth and marketing?”.

The question should be attacked from a different perspective, though: will Google clean up their act and start providing an ethical marketing platform that’s transparent, so that events like the Jedi Blue scandal don't happen again? Well, the aftermath of the Jedi Blue scandal findings are not a source of encouragement. The collaboration between Google and Facebook included a plan of how they would support each other should details come to light. It’s exactly what they are doing. Google denies any wrongdoing and says accusations are based on factual inaccuracies.

However, as you will learn in the next article of this series, Google can make improvements. They are making big changes to user privacy, but how did we get to this good outcome? Regulatory bodies handed out fines and Google was in the spotlight for its poor user privacy policies. It suggests that the same will need to happen for the company to address the fairness and transparency of their ads platform. If the courts do not find Google guilty of wrongdoing and public outcry recedes, marketers will have a hard time trusting the Google Ads platform.

Should your company continue to use Google Ads? If you are making a profit using Google Ads, then continue to use them. In the end the platform will not hurt your business if it continues to provide a positive ROI marketing channel. However, it’s a personal decision. If you want to boycott the platform, then that might send a message when enough publishers get on board.

The Importance of Trust in Performance Marketing

The Jedi Blue scandal is a worrying development because it breaks the trust PPC marketers have in Google Ads. Marketers cannot trust that the placement of their ads and the amount they are getting charged is fairly calculated. Without trust any relationship is built on quicksand and it’s only a matter of time before it collapses. If potential alternatives could present themselves as viable alternatives for PPC marketers, it would be easy to see why they will flock towards these options.

It’s no secret that customers will buy products from a brand they trust than a generic one, even if the prices are higher. The same is true of marketers choosing a platform to launch advertising campaigns. Building loyalty within an industry creates success for everyone and stability in the long-term.

The unsettling revelations in this article might make you want to change the way you view Google Ads forever. It’s understandable to feel betrayed by a company you have spent a lot of money with.

However, as you will see in our next article (“Why the Google Ads Platform is Worth Using, Despite Its Flaws”), the matter should not be one of deciding between using or not using Google Ads, per se. The issue at hand lies in asking Google to be more transparent as a business, and provide equal chances and rights to all users.

December 21, 2021 | 5 min reading time
When Ralph Perrier, our CEO, embarked on the ClickGUARD journey, he aimed to create an…